Double Coconut Cream Pie is a classic dessert that is easier than you thought to make! This is one of the first pies I ever made when I first got married. It has a filling that is a cinch to make, and it tastes so good! Every time I make it I find myself licking the goodness right out of the bowl. Of course, after its cooled down!

You will need to first make one recipe for Butter Pie Crust Pastry. Prepare and bake ahead of time. Make sure the crust is chilled prior to baking in the oven.

Next take three eggs, and seperate the yolks from the whites. Reserve the whites in a mixing bowl to prepare the meringue topping later, and put the egg yolks into a small bowl. Let the egg whites hang out on the counter as we want them to be as close to room temperature as possible when we use them.

In a saucepan combine sugar, cornstarch, salt, milk, and cream of coconut. Stir until well combined, and cook over medium heat. Please don't turn around and leave this alone for to long. Once the milk is hot use a whisk to stir regularly, as we don't want the milk to scald or stick to the pan. Once the pudding starts to thicken stir constantly until it is thickened.

Reduce the heat. Combine roughly one cup of pudding with the three egg yolks and blend together in a small bowl. The reason for this step is so the eggs can be added to the pudding without curdling. No one likes to see itty, bitty bits of scrambled egg in their pie. 😉

Add the egg mixture back to the pudding, and cook. Stir constantly for a few minutes more to allow the egg yolks to cook a bit.

Remove from heat then add the butter and vanilla to the mixture. Whisk until butter is melted, and the ingredients are incorporated which will take a couple of minutes. Stir in the flaked coconut.

Pour the still warm filling into your baked pie crust. Set aside so you can prepare the meringue topping.

Prepare your meringue topping by adding the cream of tartar and remaining vanilla to the egg whites. Beat in mixer on high speed until soft peaks form,  and then add sugar beating until stiff peaks form.

Take prepared meringue and spread over the top of the pie filling. Spread out to the edges of the pie, and seal well.

If there isn't a good seal after the pie cools it can shrink back from the edge. So be sure to take special care to seal at the pie crust edge. It will still taste incredibly delicious but it might have an impact on your presentation. A little secret...usually no one cares what it looks like after they have the first bite. It's heavenly!

Take a spoon to make designs in the meringue and even out. Sprinkle with fresh shaved coconut if desired.

Bake in a preheated 350-degree oven for about 20 minutes or until the meringue is cooked and slightly browned. Cool for about an hour on a wire rack and then refrigerate for 3 to 6 hours prior to serving. Cover what may be left of your Double Coconut Cream Pie and store in refrigerator for up to three days. 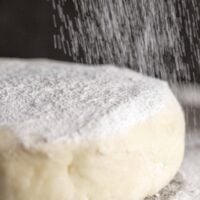 Cover left over pie, and refrigerate for up to three days.