I scream, you all scream, we all scream for...stuffed pork loin! A versatile and forgiving dish that can pretty much be stuffed with anything you like. I chose a bacon wrapped pork loin stuffed with herbed goat cheese, spinach, & mushroom stuffed pork loin. This is the very first time that I have tried it wrapped in bacon, and the results were amazing! Serve this with a side of Instant Pot Mashed Potatoes or Instant Pot Applesauce!

I used about a three-pound pork loin with the fat cap trimmed off. Since we are wrapping this in bacon there will be plenty of fat to keep the meat moist. You will need to take your knife to make a cut the length of the loin about a half-inch from the bottom of the loin. The first cut will need to stop about ¾ through the loin.

Open the pork to get ready to make your second cut to the loin. Take your knife along the center part and make a second cut in order to open the pork loin to make it flat. At this point you can choose to keep it as is or trim the pork to your liking.

Season the inside of the pork loin with salt, pepper, and Everglades Original seasoning. If you don't have any you can purchase some through the link below or substitute with seasoned salt.

To prepare the filling combine the goat cheese, chives, parsley, salt, and pepper. Place this in the refrigerator to chill while we prep the veggies. Chop the shallots and cook in a pan over medium heat in olive oil and butter until softened. Add sliced mushrooms, and spinach. Salt and pepper the mixture. Allow the mixture to cook until the spinach is wilted. Add in the garlic and cook until fragrant about two minutes.

Next, spread the chilled goat cheese mixture over the pork loin leaving room at the edges. We leave space around the edges so all of our filling doesn't spill out when we roll the loin. Top with the mushroom spinach mixture. Roll the pork loin carefully, ending seam side down. Season the outside of the pork loin roll with salt, pepper, and Everglades Original seasoning.

Wrap slices of bacon loosely around the pork roll until covered from end-to-end, tucking the ends of the bacon under the roll. I placed a few pieces of bacon on the bottom of my baking pan as well. Place the pork loin roll into your baking pan carefully.

Bake in a preheated 400-degree oven for about an hour or until it reaches an internal temperature of 145-degrees. If desired add some fresh cut vegetables for roasting with the pork. Tent after taking out of the oven for ten minutes then serve immediately. Can be stored in an airtight container for up to one week. 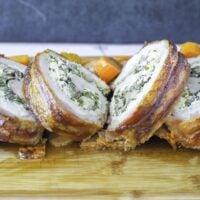 Serve immediately. Can be stored in an airtight container for up to one week.Â

Hi, I'm Tina! I'm the writer, photographer, recipe developer, and one of the many taste tester's at Monday is Meatloaf. I live in a sleepy Florida town on the out-skirts of the Tampa Bay metro area. Growing up I got the opportunity to see a lot of great family cooks in action, but I didn't delve into the culinary world until later. My blog focuses on simple cooking techniques that maximize flavor across a variety of cooking disciplines that are totally do-able for the home cook.