Instant Pot Bananas Foster Cheesecake is a rich combination of a delicious vanilla cookie pecan crust with a creamy banana and rum filling plus warm cinnamon and nutmeg tones. All of this is topped with a fresh banana fosters topping made with rum, dark brown sugar, pecans, and spices. Be sure to make some classic beignets to add to the dessert table too!

What is bananas foster and where did it come from?

Bananas Foster was a dessert created in the New Orleans French Quarter by Ella Brennan, and is stilled served today at Brennan's Restaurant. The dessert consists of bananas, rum, brown sugar, and cinnamon. It is traditionally flambeed tableside then served with vanilla ice cream.

The legendary dessert was named after Richard Foster at a dinner given in his honor by the proprietor, Ralph Brennan. Over at the Thrillist we learn that the restaurants renowned chef Paul Blange who worked with Ella to create this delicious dessert still may haunt the renowned establishment.

If this is your first time making a cheesecake or if you are a seasoned veteran of making them in the oven, this is a simple recipe to learn how to make a cheesecake in the Instant Pot!

Start by greasing a springform pan with either butter or cooking spray. Put about 20 vanilla wafer cookies in a gallon plastic bag and seal. Using a rolling pin gently roll to crush the cookies. If you don't have a rolling pin crush with your hands or a can of vegetables.

Put the crust mixture into the prepared springform pan. Gently spread around the bottom of the pan, and up the sides slightly with a spoon or mini spatula. Put the pan in the refrigerator for a minimum of 15 minutes to chill.

The filling for this Instant Pot Cheesecake starts with full-fat cream cheese that has been softened to room temperature by putting it in a large mixing bowl. Add the sugar, and cream together with a hand mixer or in a stand mixer.

Next, beat in the eggs one at a time.

Add to the cream cheese mixture the heavy whipping cream, flour, vanilla, dark rum, cinnamon, and nutmeg then mix in.

Mash one large ripe banana looking to yield about ¾ cup of mashed banana. Fold into the cream cheese filling with a spatula or mixing spoon.

Pour the prepared cheesecake filling into the prepare springform pan. Cover both top and bottom of the pan with aluminum foil.

Add 1 ½ cups of water to your Instant Pot, and then lower cheesecake into pot on top of rack. I use a 6-Quart Instant Pot Duo for this recipe. Seal the lid then cook on high pressure (normal) for 35 minutes followed with a 10 minute natural pressure release.

Once done cooking remove from the pot to cool on a wire for one hour leaving the cheesecake covered. Once the hour is up place in the coolest part of your refrigerator for 8 hours to overnight.

Once completely cooled and chilled remove from the springform pan. To do this take a small sharp knife and run around the sides of the pan.

Then gently open to loosen the sides the remainder of the way. Take a thin metal spatula and gently lift around the edges to begin to loosen in about four or five spots. Gently slide the spatula underneath to loosen then remove to plate.

Tip: This can be made a few days ahead prior to finishing if planning to take to a potluck or party.

Turn the Instant Pot on to saute mode, and once heated add in the butter to melt. I used unsalted butter for this recipe. Once the butter is melted add in the dark brown sugar and stir then let cook for a couple of minutes. Next add in a pinch of salt and the rum. Cook for about five minutes.

To finish, add in the heavy whipping cream, cinnamon, and nutmeg then stir until combined cooking for an additional two minutes.

Pour the sauce into a small bowl then add the sliced banana and pecans. Add an additional dash of cinnamon and nutmeg to this mixture then stir together. Once combined pour on top of the cooled and chilled cheesecake.

Serve immediately or store in an airtight container for up to one week. Be sure to serve this with some red beans and rice.

If you enjoyed this recipe then you may like Instant Pot Cherry Chocolate Cheesecake, Healthier Chocolate Banana Oat Bread, or you may want to check out this huge list of 28 Irresistible Instant Pot Desserts! 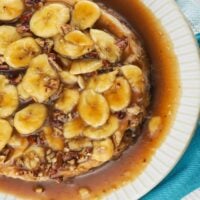 US Customary - Metric
Prevent your screen from going dark

*I used unsalted butter for this recipe.Â  *To remove from springform pan loosen sides with a small sharp knife, and remove collar. Then using a thin spatula lift edges from bottom in about 4 to 5 places then slide under entire cheesecake to loosen the remainder of the way. Remove to plate.Â  *This can be made a few days in advance if planning to use for a potluck or a party.