I don't know about you but I think meatloaf is the best thing since sliced bread. In fact, I like it so much I even included it in the name of my blog. 🙂 Meatloaf is a quintessential comfort food that can be made in an endless variety of ways. I tried out this recipe for Bacon BBQ Stuffed Meatloaf that was adapted from  Tom Horsman's Camp Chef Woodwind SG/ Rolled, Stuffed, Bacon Wrapped Meatloaf! recipe which he kindly shared with me on my Facebook page.

Start with about two pounds of ground beef, I like to use meat that has an 80/20 ratio of meat to fat or oftentimes it's referred to as ground round. As a general rule of thumb this is a good ground beef that won't be either overly dry or overly greasly. You will also need one pound of pork breakfast sausage. Let's get started with this incredible delicious Bacon BBQ Stuffed Meatloaf.

Dice an onion and a green pepper. Saute in olive oil for a few minutes until softened then set aside to cool for about 5 minutes. Be sure to do this step first before making the meatloaf mixture. This way the meat mixture will stay relatively cool which translates into the Bacon BBQ Meatloaf keeping it's shape better.

Next pat out the Bacon BBQ Stuffed Meatloaf mixture onto a large piece of aluminum foil into about a 10 x 12 rectangle. It should be about one-inch thick. Lay about 6-8 slices of deli ham, and about the same amount of sliced Swiss cheese or 1 ½ cups shredded Swiss cheese on your meat rectangle leaving about a one-inch border around the meat mixture.

Next start rolling the meatloaf from the short side using the foil to help roll. Be careful not to squish all the yummy guts out of the meatloaf while rolling. You should finish seam side down, and then kind of pinch and pat the ends so the are closed to keep all that cheesy goodness in as much as possible. Set the meatloaf on a foil lined baking sheet, this will help on clean-up later. 🙂

You can use whatever quality of bacon you like so long as it's not so cheap that it will pull apart to easily or otherwise rip apart as your building this. Lay one strip of bacon down vertically. Then lay several pieces down horizontally alternating one top of the piece of bacon and one underneath until you have enough pieces to cover the horizontal strip. Continue laying down vertical strip until you have a piece large enough to cover your meatloaf roll.

You have two options for cooking, the grill or the oven. Preheat the oven or grill to 375-degrees. For the oven, place in the middle of the preheated oven and cook for about an hour or until the internal temperature of the meatloaf reaches 160-degrees. Remove from the oven, brush the meatloaf with the remaining BBQ sauce. Set the oven to broil.  Broil for about 10 minutes. Then remove from the oven to rest for about ten minutes prior to serving.

On the grill I added a wood box over the direct heat to add a little smoky flavor. I cooked the Bacon BBQ Stuffed Meatloaf on the baking sheet over indirect heat keeping the temperature of the grill around 350-375 degrees. Rotate the meatloaf halfway through cooking, and cooking time should be around an hour or when it reaches an internal temperature of 160-degrees. Brush the meatloaf with the remaining BBQ sauce the last 10 or 15 minutes of cooking.

Let the Bacon BBQ Stuffed Meatloaf rest for about 10 minutes before slicing and serving. The leftovers are great for second quick weeknight meal or great served up as sandwiches for lunch at the office.

Of course, if you enjoyed this you might also love Instant Pot Cheesy Ranch Potatoes, Meatloaf Stuffed with Tomatoes and Sauerkraut, or Easy Pork Schnitzel! 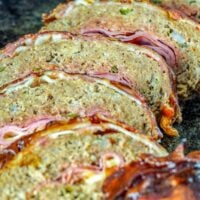 A tasty Bacon BBQ Stuffed Meatloaf that is super easy to make on the grill or in the oven. Many times when I'm looking for an Sunday dinner I'll make a meatloaf. What's wonderful about this is there are usually lots of yummy leftovers for a second quick weeknight dinner or sandwiches for lunch at the office.
5 from 2 votes
Print Pin Rate
Course: Main Course
Cuisine: American
Prep Time: 20 minutes
Cook Time: 1 hour 15 minutes
Resting Time: 10 minutes
Total Time: 1 hour 35 minutes
Servings: 16 slices
Calories: 454kcal
Author: Tina

Hi, I'm Tina! I'm the writer, photographer, recipe developer, and one of the many taste tester's at Monday is Meatloaf. Growing up I got the opportunity to see a lot of great family cooks in action, but I didn't delve into the culinary world until later. My blog focuses on simple cooking techniques that maximize flavor across a variety of cooking disciplines that are totally do-able for the home cook.

Hi, I'm Tina! I'm the writer, photographer, recipe developer, and one of the many taste tester's at Monday is Meatloaf. Growing up I got the opportunity to see a lot of great family cooks in action, but I didn't delve into the culinary world until later. My blog focuses on simple cooking techniques that maximize flavor across a variety of cooking disciplines that are totally do-able for the home cook.